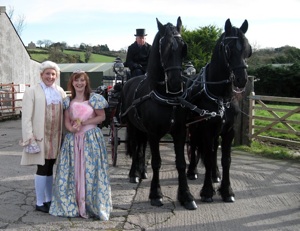 The Bart Players was formed in 1953, over 50 years ago, as a social activity for the then large St Bartholomew’s Church Choir.

The late Peggy McVey  and the late Professor Robert Armstong were the inspiration to get it going. Robert ultimately went on to become Professor of Drama at one of the American Universities and returned on occasion to adjudicate in his native land.

By 1956 membership was opened to non-choristers and so the foundation for today’s company was laid. The first full-length production “Is Life Worth Living” was staged in 1957 and thereafter an annual programme of two full-length plays was established together with occasional one-acts.

In 1961 we abbreviated our name to Bart Players and helped to found the Churches Drama League – winning the first Festival with “Sailor Beware”. The next year we were accepted to participate in the Portrush Summer Theatre with “Watch it Sailor”, our aim being to establish a bank balance besides having an enjoyable holiday in the “Port”.

The new Parochial Hall was built in 1963 and with the accumulated funds we fully equipped the stage with drapes, lighting and flats etc – all still in use to-day.

Almost fifty years on we are now at the point where all of these items need to be replaced and we are currently embarking on a renewal programme.

The Company joined the festival circuit in 1966 with “The Diary of Anne Frank” and in 1967 our production of “Hobsons Choice” was sufficiently good as to merit selection for the Ulster Drama Festival Finals in the Grand Opera House – the first Church Group, we believe, to reach the Finals.

In the intervening years Bart Players has appeared in all the major towns in Northern Ireland besides winning numerous festivals with shows such as “This Happy Breed”, “Confusions”, “Oh What a Lovely War”, “Titanic”, “Heil Belfast” and “Happy Birthday Dear Alice”.

Bart Players had the honour of winning the AUDF Finals on three occasions, besides appearing several times at the Dundalk International Festival and twice in the All Ireland Drama Finals in Athlone.

A highlight was our appearance in the Belfast Festival at Queens in 1975 with an epic production of “Vivat Vivat Regina”.

We were also invited to re-open the Group Theatre after it suffered extensive damage in the Bedford Street bomb.

Following our successful festival production of Hugh Leonards play “Summer” we, by popular request, re-staged “Titanic” as further contribution to the millennium festivities.
To see a full list of our productions go here.

We thank you for your continued support over the years and feel sure you will thoroughly enjoy this seasons performance.