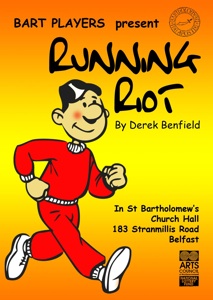 This year a move was made away from the traditional pantomine as our Christmas show, and instead the Bart Players presented a decidedly untraditional farce. Somewhat earlier than usual, Running Riot by Derek Benfield and directed by Gillian Porter was performed in the Canon Lindsay Hall on 8-10 November 2007. An Allo-Allo style romp, this was a play thoroughly enjoyed by the cast and audiences alike – “ze robin is on ze bough”.

Photographs from the show can be viewed here.

Following the success of Misery the previous year, our Festival entry had a lot to live up to. And it succeeded in being even more successful! The Big House by Lennox Robinson was directed by Gillian Porter and was performed in the Canon Lindsay Hall on 8-10th March 2008. It then went on the usual festival tour, in Newry on 10th March, Newtownabbey on 12th March and Bangor on 2nd April.

Just some of the awards garnished by The Big House were:
Newtownabbey Drama Festival

The success of The Big House meant that it qualified for AUDF finals in Armagh in May 2008. After achieving runner up the previous year it was extra sweet to win this year! The full results were:

Our summer show in 2008 was Busybody by Jack Popplewell was directed by Emma Townsend with the assistance of Christine Martin. Again featuring a few familiar faces, it was a comedy who-dunnit in the usual summer style.
Once again we took the show to the Courtyard Theatre, Ballyearl (1-2 August 2008) and Portrush Town Hall (20-23 August 2008) where we played to appreciative packed houses. We brought the show back to the Canon Lindsay Hall on 11-13 September 2008 for a belated home run.

The cast and crew of Busybody were: