The 2011-2012 got off to a fantastic start with our pantomine “Aladdin” directed by Simon Pyper.  It was an all singing all dancing extravaganza which played at the Canon Lindsay Hall between 30th November – 3rd December 2012 for 5 performances.  It was very well received by the audiences and was great fun for cast and crew alike. 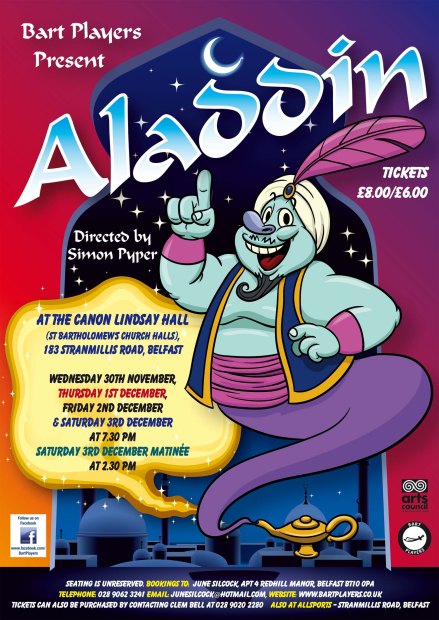 To view the programme from this production click here – Aladdin Programme

Following the success of the pantomine, the Bart Players undertook an unprecedented challenge with two shows for the Spring, the festival entry “Stella by Starlight” by Bernard Farrell and an Open Stages production under the auspices of the Royal Shakespeare Company “The Globe Motel”. 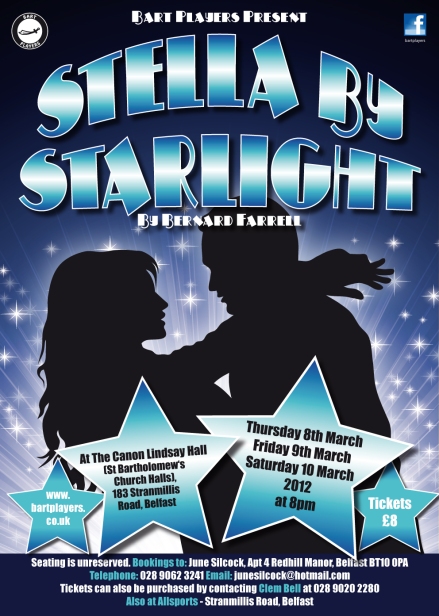 Our festival entry “Stella by Starlight” was once again directed by Gillian Porter.  This hilarious comedy takes place during an evening and following morning in the life of a contemporary Irish couple Dermot ( a redundant corporate employee)and Stella (a former Dublin bank teller) who ,with their daughter Tara ,have left the economically booming city for a new life in the remote countryside. Visitors arrive to help them share the excitement of a comet crashing into Jupiter and things go from bad to worse.

Following the home run, Stella by Starlight toured on the Association of Ulster Drama Festivals circuit and was performed on the following dates:

The play was generally well received by the adjudicators and placed 2nd overall in Lane and 3rd in Derry.

Whilst the cast of Stella were busy rehearsing for the festival run the rest of the company were involved in a ground-breaking production “The Globe Motel” which was a co-production with the Dublin Shakespeare Society.  Led by Barney Gadd, James Burns and Lorna Hastings, this was a mammoth task, producing a site specific promenade performance in conjunction with a company some 100 miles away!  The show took pieces from a number of Shakespeare plays and wove them into an unforgettable evening’s entertainment.  The group relished the challenge of presenting the challenging piece in a number of diverse venues, the Canon Lindsay Hall, Findlater’s Church in Dublin and the Naughton Studio at the Lyric Theatre, Belfast.

Photographs of the production are posted on our facebook site here

To bring the year to a close, Bart Players produced “Tiptoe through the Tombstones” by Norman Robbins for the summer season. This comedy thriller was directed by Andrew Devonshire, and proved a hit with audiences at home and away alike. 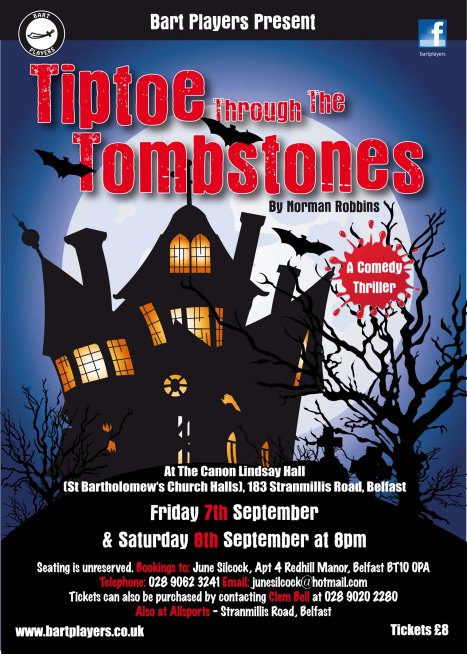 Months have passed since the ghastly events in Monument House occurred that are related in A Tomb with a View. Mortimer Crayle, the crusty lawyer, and his secretary have gathered the remaining members of the Tomb family at the house, ostensibly to inform this off beat bunch about their inheritance. In reality, Crayle has designs on the estate that necessitate eliminating all Tombs. Fog descends on the gloomy mansion. In the cobwebby corridors things and people are seldom what they seem. Poison is in every decanter and there are mysterious disappearances. Hosts and guests join the rising pile of bodies in the cellar. Previous acquaintance with the Tombs is not required to enjoy this glorious spoof.

The show was presented at the following venues:

To see the programme from this production click here – Tomb Programme

To view pictures of the show click here and here