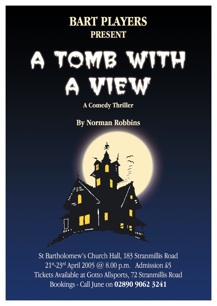 This summer season saw the Bart Players return to the Portrush Summer Season for the first time in many years. The Summer season was still being held in its temporary home at [tbc] which gave the cast and crew several logistical problems to overcame, not least the communal changing room separated from the audience by a curtain!

The show was Tomb with a View by Norman Robbins, directed by Christine Martin and it was performed initially in the Canon Lindsay Hall at St. Barts in April 2005 and then in Portrush in August.