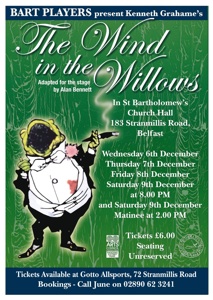 Our Christmas show this year was Wind in the Willows by Alan Bennett, directed by James Burns in his directoral debut with the Bart Players. It was performed to packed audiences in the Canon Lindsay Hall between 6-9 December 2006.

See photos from this production here

Our festival entry in 2007 was a brave choice, Misery by Stephen King, adapted for the stage by Simon Moore. This was a two hander, ably directed by Christine Martin and the two courageous actors were Alan Martin (Paul) and Lynne Taylor (Annie).

The show had its home run in the Canon Lindsay Hall at the start of March 2007, and then began its tour of the festival circuit, entering Ballymoney, Newtownabbey, Portadown, Larne and Newry festivals.
Following its success on the festival circuit, Misery qualified for the AUDF finals in Armagh. Prior to the finals, it was performed again in the Canon Lindsay Hall on 3 and 4 May 2007.
In May 2007, Misery was awarded runner up in the AUDF finals in Armagh. Christine Martin was awarded The Belfast Newsletter Cup for Best Director and Lynne Taylor won The UTV Hubert Wilmot Award for Best Actress.

Misery did extremely well in its festival run, receiving the following awards:

Click here to view the programme for this production – Misery Programme 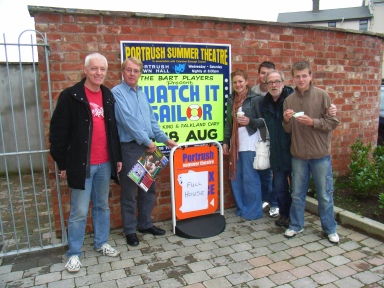 Our summer show in 2007 was Watch It Sailor by Philip King and Falkland Carey, the sequel to 2006’s Sailor Beware. It was once again directed by Barney Gadd, and featured a number of familiar faces!